Can Home Security Window Film Reduce the Risk of Break-Ins?

Looking for an affordable way to make your home more secure without detracting from its appearance? Home security window film can be an excellent choice.

Since it’s thin and nearly invisible, it may be hard to believe it can protect your home from intruders. But home security window films, specifically 3M™ Safety & Security Window Films, Safety Series for Residential, make windows significantly stronger and harder to break than windows without the film.

3M Safety & Security Window Films are very strong because of the way they are designed and the materials that are used to make them. The film’s special micro-layered polyester technology and more aggressive adhesive increase the films’ tear resistance significantly.

How Does the Window Film Reduce the Risk of Break-Ins?

Alarm systems will tell you when an intruder has broken into your home. However, window film can actually make it harder for them to get in your home in the first place. Recent testing has shown, for example, that 3M™ Security Window Films & Attachment Systems can deter intruders and increase the time it takes them to get into a home by as much as two minutes. 3M Impact Protection Attachment Systems attach to the frame of the filmed window. They then work in conjunction with the window film for premium protection.

Two minutes may not seem like a lot of time. However, it can be enough time for you or your loved ones to call for emergency help, to seek a safe spot to hide, or to leave the home. In addition, since the intruder faces resistance when trying to break-in, and because their attempts to break the glass make a lot of noise, they may become discouraged or fearful that they’ve been heard. This may cause them to abandon their plans to commit the crime altogether.

Home Security Window Films Have Other Features Too

If your windows are broken by accident or due to an act of nature, like a bad storm, 3M™ Safety & Security Window Films are designed to hold glass intact. That means that while a window may break, the glass won’t spray. This safety feature can reduce or prevent injuries to your family and pets caused by broken or flying glass shards.

3M™ Safety & Security Window Films come in styles and colors that enhance the beauty of your windows and can also be combined with other types of 3M™ film for other benefits. For instance, you can combine them with 3M™ Sun Control Films to keep your home cooler and reduce energy costs.

Carolina Solar Security serves Wilmington, NC as a premium 3M™ Authorized Window Film Dealer. We have been providing North Carolina homeowners and business owners with window tinting solutions since 1985. Our team never stops working to bring our customers the best products paired with the most skilled window film technicians. Reach out to us for your free quote today!

By Carolina Solar SecurityPublished On: July 26, 2019 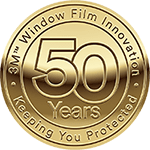